CRL completes work at Kyle of Tongue Friday, 16th May 2014

The works included concrete repairs to the deck structure and the installation of sacrificial anode CP system to the deck beams, pile caps and steel piles. In addition to this the bridge was fully resurfaced and all parapets were renewed.

One of the major challenges on the project was to come up with an access system that was quick to install and could be hung from the existing structure. This aspect of the work was satisfied using a combination of traditional hanging scaffold and a decking system suspended from tensioned cables called WebDeck. Both of these systems had to be carefully positioned to ensure the final deck level remained above the level of the highest tide.

In order to make this saving in time the site team managed to negotiate a short full closure of the bridge to allow the waterproofing and resurfacing works to be carried out in a single visit and by introducing some additional scaffold access, six weeks was shaved off the works programme giving a project completion in mid October instead of the end of November.

The area where the bridge crosses is an area with incredibly diverse wildlife. One of the environmental aspects of the project that had to be carefully managed was that sea otters were living in the rock armour at either end of the bridge. These are a protected species and we had to take care not to disturb them during the works. 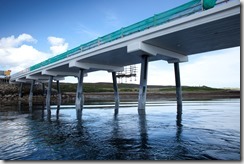